­
Previous Next
Impact of GST on warehousing in India

Impact Of GST On Warehousing In India

In India, there has been no uniform and easy to implement taxation policy in place across various supply chains. Consequently, the distribution as well as warehousing strategies are tax oriented which restricts effective utilization of available resources. As we have seen, companies build warehouses in each state to evade taxes which actually is not a good practice as far as logistics efficiency is concerned. And even the existing warehousing infrastructure is still unorganized. But with GST coming to the fore and because of its simplified and uniform approach, there is surely going to be a more positive impact of GST on warehousing in India. As warehouses are an integral part of each supply chain, read on how GST will impact warehousing in India – 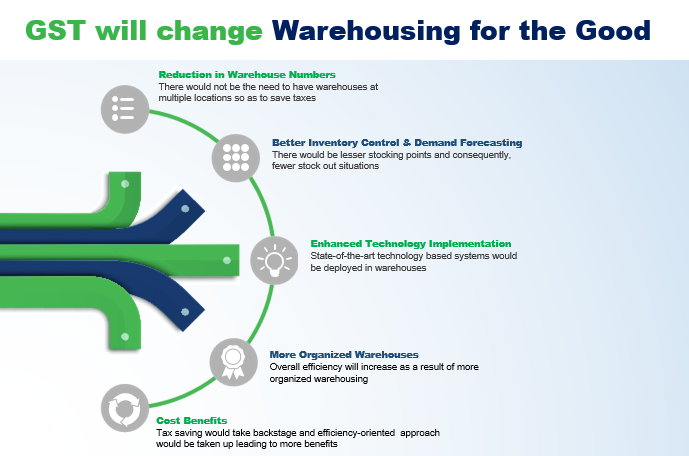 1. Reduction in number of warehouses

Presently, companies feel the need to build at least one big warehouse in different states because of different taxes being imposed in the states. This increases the storage cost and affects the warehousing structure in India. With GST in place, there would be uniformity in imposed taxes and companies would not require to pay for taxes in different regions. Companies would have one big warehouse at a central location which might serve multiple states leading to decrease in the no. of warehouses. Alternatively, companies may opt for warehouses at specific locations on the basis of hub and spoke model. We can safely assume GST will have a direct impact on the total count of warehouses in a supply chain.

Current tax structure in India leads to complicated warehousing decisions like setting up of huge inventory and at times, running out of inventory when demand rises suddenly. GST would have a huge impact on inventory efficiency as there would be lesser stocking points and case of stock outs would also be fewer. This will all be due to companies taking advantage of economies of scale and making better forecast for the upcoming demand, thereby ensuring that supply chain process is up and running. Surely, this will lead to a positive impact of GST on warehousing in India.

3. Technology Implementation on a larger scale

As mentioned above, consolidated warehouses would be larger in size for accommodating more inventory at a central location, these warehouses would definitely benefit from technological sophistication by implementing state-of-the-art planning and warehousing systems which are not possible in smaller and scattered warehouses. There would be indirect impact of GST on warehousing in India, as IT costs of deploying ERP systems at smaller warehousing locations would be eradicated. Analysts also predict that it will ensure improved service levels at lower cost in overall supply chain.

We see there is so much scope for organizing the current unorganized setup of warehouses in India. In the present scenario, research says that there are around 20-30 warehouses for each company, almost 1 in every state. This gets further complicated when those warehouses are sustained by 20-30 C&F agents leading to complexity in supply chain and causing inefficiency. Warehousing industry will feel the impact of GST as the need to build warehouse in each state would be almost over and this will lead to better organized warehouses and ultimately, enhancing the overall efficiency.

GST will diverge the attention of conscious tax savings on supply chains to efficiency oriented approach as warehousing sector will be optimized to a greater deal. This will not only save logistics costs for LSPs but these benefits would be passed on to the customers too.

There is no running away from the fact that GST is going to be implemented pretty soon. But we can assume very safely that impact of GST on warehousing in India is going to lead us in the positive direction. Warehousing sector is bound to get more organized and overall profits are there to be reaped. There is an estimated growth of around 18 % in warehousing until 2017, which will be above 20% in the coming years with GST’s implementation. Are you ready for this leap and in case you want to make sure that you change with the flow? At Holisol, we have the expertise in warehouse designing for supply chains of different industries for the past 7 years. Just get in touch to make your infrastructure compliant and ready for GST’s impact on warehousing in India. For information communication@holisollogistics.com

About the Author: Communication